Are DIY baby impression kits a good idea or a waste of money?

When you have a new baby, every day is an adventure. Of course, you want to capture every moment and treasure it, and so you should.  They don’t stay little for long and every day they are growing…what keepsakes should you be capturing?

As well as taking eleventy billion photos (a day) you might also try your hand at some arty crafty stuff! Who wouldn’t want an adorable card made with a little painted hand or footprint? This can get a little bit messy, but it’s good fun and the results don’t need to be perfect. Homemade means it was made for you, at home. Low budget – High sentimental value.

And then you see a kit in B&M Stores…it looks quite cool…you can make an imprint of those tiny hands and feet (that are growing up way too quickly) and you have a beautiful keepsake to treasure forever!

“I just created an entire human being…how hard can it be to make an imprint of their hands n feet? And it’s only £4.99…Bargain!” 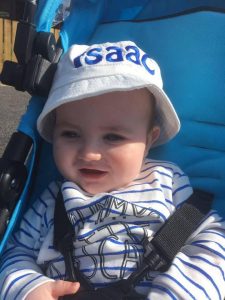 They wanted to capture little Isaac’s hands and feet and they bought two of these kits – but things didn’t quite go to plan! Here’s what they told me…

A framed imprint of Isaac’s hands and feet.

They were VERY brief, just bullet points and really simple.

We followed the instructions. We measured the cold water and mixed up a really runny and watery mixture and poured it into the container provided. Then we had to try and get Isaac in it!

The mixture was really cold and runny…trying to put a young baby into it was impossible! The dish was useless too. It just made a sticky mess!

He hated the cold and seemed a bit confused! Probably wondered why his parents found it all so funny!

No! Only enough for one go – that was it. We didn’t want to attempt it again anyway!

We started to look on Google. We knew someone in Edinburgh who did baby casts but they weren’t doing them now so we searched online to see if there was anywhere locally that did this professionally. That’s when we found Impressive Memories.

What is the difference between an imprint and a lifecast?

I think it’s important to understand the difference.

What is an Imprint?

This is a 2D, a fairly flat impression of the baby had or foot pressed into something. The definition varies as does the finish. You should end up with a sort of ’tile’ with the detail of the baby either pressed into a clay, or you can then make a secondary version of this where the detailed part is raised and above the tile. Something like this…

Imprints and outprints can be made in stone plaster or ceramic. Again, this depends on whether you’re making them at home or having them done professionally. With good instructions and materials, these are achievable at home. I am going to produce a ‘How To’ guide soon to let you make these, successfully, at home.

What is a 3D Lifecast?

A 3D life cast is a high definition, exact replica of all of baby’s hands & feet. Fully three-dimensional. Much more difficult to create and in my opinion not something to be done at home. Expect to pay a higher price for this than a 2D imprint.

You've decided to find a professional...

Having attempted a 2D Imprint with no success, Genna and Derry visited my Impressive Memories website. They decided they wanted 3D lifecasts of their son Isaac. They looked online and chose from the luxury range of frames. They knew they wanted a luxury oak, single aperture frame with a cast of Isaac’s hand and foot finished in antique silver.  Instead of wasting £10, they invested £120. It may have been more expensive, but the end result proved to be an investment, not a disaster.

Here are their Impressive Memories of Isaac, at 7 months old…

Isaac was wide awake throughout his casts being taken but he was totally at ease and relaxed throughout, and so were mum and dad. In less than an hour the family had been and gone. No mess. No fuss. Not cold and no disasters.

Today, almost 5 weeks later, Genna and Derry came back to collect their completed order and were delighted with the results. The level of detail and the beautiful relaxed little fingers, not to mention Isaac’s characteristic little squished toes.

“Don’t do it – don’t waste the money, invest in a professional”.

A really easy guide for you to make 2D impressions at home SUCCESSFULLY!

2D impressions are so easy to do and with my help, you can make beautiful memories at home. Disaster free!

This handy little eBook is stuffed full of all the answers that new parents ask me about life casting their babies and children.

Is my baby suitable? How do I book? Is it safe? How does it work? How Much will it Cost?

Pop your email address in the box then head to your inbox…confirm that you got the email and before you know it – another email will zoom to you with your eBook!